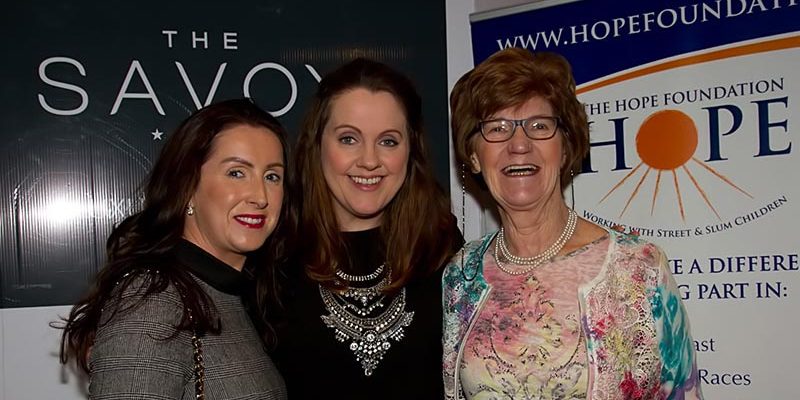 At the Luncheon contributors launched the book ‘Be the Change’ which is a series of inspirational answers to Mahatma Gandhi’s famous question ‘How can I be the change that will make the difference in the world’. In the book, which is introduced by Maureen Forrest, forty-two contributors tackle the question. It is an inspiring book with a treasure trove of wisdom that is bound to challenge and provoke the reader. Contributors Roisin Meaney, Catherine O’Byrne Casey, Bibi Baskin, Michael Murphy and Finbarr O’Mahony were onhand to support the launch.

HOPE founder and Honorary Director, Maureen Forrest, who is currently travelling to Calcutta to spend the next eight weeks overseeing the work on the organisation’s projects there, thanked the women of Limerick, the sponsors of the event and the owners of The Savoy Hotel Ronan and Anne Branigan for their continued support. During her speech Maureen called on everyone in Ireland to help make gender inequality history, ‘India is one of the most dangerous places in the world to be born a girl. Women and girls are subjected to female infanticide, rape, domestic violence, dowry deaths by burning, human trafficking and forced prostitution, teen-age marriages and honour killings. To help promote gender equality for all women regardless of where they happen to be born, we must unite with them to fight for a world where each man, woman and child gets equal justice, equal opportunity and equal dignity, without any discrimination.’

Women and men from across the world of sports, politics, fashion and business in Limerick and Ireland attended the luncheon to lend their support to those who campaign for gender equality issues to be resolved globally. The guests enjoyed a three course lunch, a gift bag for each attendee, wonderful speakers, a performance from Classical Guitarist Michael Stedman and a table draw with amazing prizes provided by the many generous sponsors of the event such as The Savoy, Grant Thornton, Nails Inc, Brown Thomas, Remembering Zoe, JJ O’Toole Ltd to name just a few.

Proceeds from the ticket sales are going to benefit the street children of Kolkata (formerly Calcutta) with whom The Hope Foundation work on a daily basis.